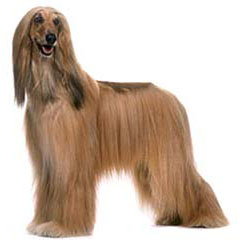 The Afghan Hound originated thousands of years ago in Afghanistan and southern Russia. The nomadic tribes that lived in this mountainous area wanted to develop a dog who could hunt both large and small game, and live comfortably in the area's harsh climate and mountainous terrain. The breed did not make its way to England and America until the 1920s. The American Kennel Club recognized the breed in 1926. In 2006, the Afghan Hound ranked 87th among the 154 breeds registered to the American Kennel Club.

Most people find the Afghan Hound to be aloof and dignified in demeanor – and these dogs usually stay that way until the people in question earn the dog's respect and trust through consistent, considerate behavior. Along with the Afghan's dignity comes independence; if you want a dog who instantly obeys your every command, the Afghan Hound is not for you. That said, early and frequent socialization – particularly with children – can go a long way toward offsetting the dog's natural reserve. Despite his elegant appearance, the Afghan Hound is a true canine athlete. He needs plenty of exercise to thrive in the modern human household.

The Afghan Hound epitomizes elegance. He ranges in height between 25 and 28 inches, and weighs between 45 and 60 pounds. His long, silky coat can be any color, but should have a white blaze on the chest. He's likely to have a black facial mask. His tail curls high over his back.

The Afghan Hound has absolutely no interest in being an obedience whiz, but that doesn't mean that he should be exempt from learning basic good manners. Gentle, positive training laced with a goodly portion of patience will get the best results with this independent breed. Those who want to take their dog's training to the next level should consider taking up lure coursing, which capitalizes on the breed's extraordinary sight, agility and speed.

An Afghan Hound is a high-maintenance individual. His silky, elegant coat needs considerable tending to look its best. Daily brushing with a pin brush is crucial to preventing mats and keeping the coat tangle-free. Most Afghan Hound devotees suggest starting this daily routine when the dog is a puppy, even though at that point the hair is short. By acclimating your Afghan Hound to frequent grooming before he needs it, he'll be tolerant of the procedure when he does. Weekly pedicures and ear cleanings, along with periodic baths, also will help him to look and feel his best.

Like all purebred dogs, the Afghan Hound has his share of genetic health concerns. Among the most common are hip dysplasia, cataracts, hypothyroidism, and autoimmune diseases. Breeding parents should receive OFA and CERF clearances before being bred. Prospective buyers should ask to see any such clearances before purchasing a puppy. In addition, like other Sighthounds, the Afghan Hound is very sensitive to anesthesia; owners need to make sure that their veterinarians take this into account before embarking on any procedure requiring anesthesia.

© Copyright 2014 LifeLearn Inc. Used and/or modified with permission under license.

View All
The Latest in Pet Health Information. Pet Health

* for boarding pick only